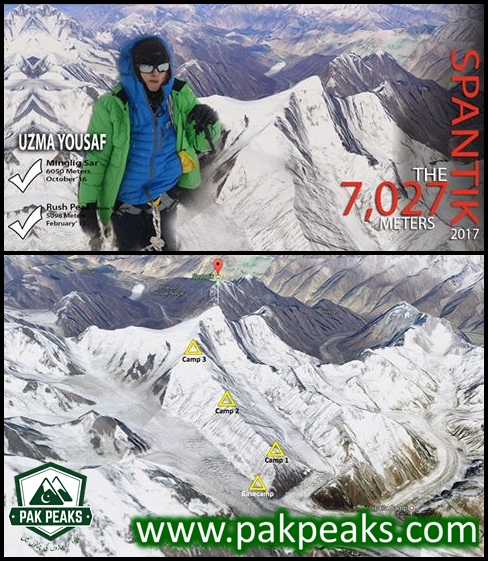 As per available material/record, Uzma is first Pakistani Lady to climb Spantik as well as any 7000m peak in Pakistan . Her high altitude team includes Wajid Ullah Nagri , Asghar Hussain and Yaseen from Tisar village.

“I have been in love with climbing and adventure activities since my childhood but I’ve not been able to go on much expeditions,” the 43-year old mountaineer said.

She started her climbing career by scaling 6050 metre Mingling Sar in October last year and 5098 metre Rush Peak in February this year told media here on Saturday at a local hotel.

“My expedition will inspire other Pakistani women that with determination and passion challenges can be overcome and dreams materialized,” she said.

Uzma, who did not get any proper training to ascend the dangerous mountains, said this would be her solo expedition.

“I’ll not be accompanied by other mountaineers. I did not invite or request others to be part of my voyage as I want to show the world that what Pakistani women can do,” she said, adding that she wanted to ascend Pakistan’s all top mountains.