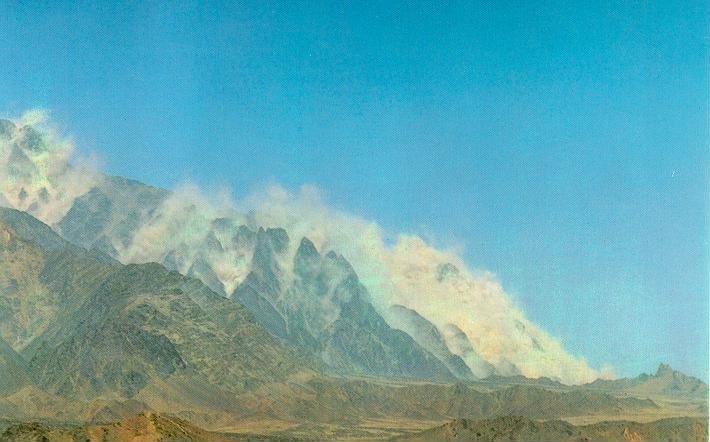 On Monday, 11 May 1998 Indian Prime Minister Atal Behari Vajpayee  stunned the world by announcing at a hurriedly convened press conference that earlier that day India had conducted three nuclear tests. International observers were, if anything, even more astonished by the announcement two days later that two additional tests had been conducted. This act of India finally pursued Pakistan for a befitting response and on 18 May 1998, the Pakistani premier ordered his scientists “Dhamaka kar dein” (Conduct the explosion).

The 28th May 1998, thus became the A-Day for Pakistan or the Youm-e-Takbeer when at 3:16 pm in the remote mountains of Balochistan, Pakistan carried out its first nuclear test under the Koh Kambaran (Ras Koh Hills). In an TV address to the nation, the then prime minister of Pakistan congratulated the Pakistani nation and said that “Today, we have settled a score and have carried out five successful nuclear tests.”

Ras Koh Hills are independent of and should not be confused with the Chagai Hills further north on the Afghanistan-Pakistan border, in which, to date, no nuclear test activity has taken place. 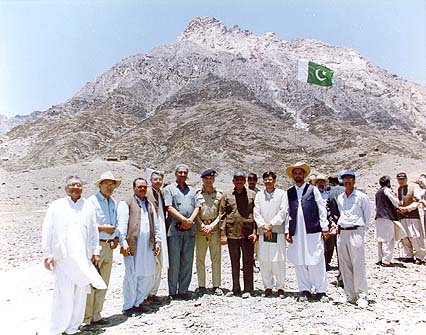 The Pakistani scientists posing with a nice view of Koh Kambaran in the background.

A short while after the button was pushed, the earth in and around the Ras Koh Hills trembled. The OP vibrated as smoke and dust burst out through the five points where the nuclear devices were located. The mountain shook and changed colour as the dust of thousands of years was dislodged from its surface. Its black granite rock turning white as de-oxidization from the radioactive nuclear forces operating from within. A Huge cloud of beige dust then enveloped the mountain. The time-frame, from the moment when the button was pushed to the moment the detonations inside the mountain took place, was thirty seconds. For those in the OP, watching in pin-drop silence with their eyes focused on the mountain, those thirty seconds were the longest in their lives. It was the culmination of a journey which started over 20 years ago. It was the moment of truth and triumph against heavy odds, trials and tribulations. At the end of those thirty seconds lay Pakistans date with destiny.

The Pakistani Ministry of Foreign Affairs would later describe it as Pakistans finest hour. Pakistan had become the worlds 7th nuclear power and the first nuclear weapons state in the Islamic World.

Two days later, Pakistan conducted its sixth nuclear test at Kharan, a flat desert valley 150 km to the south of the Ras Koh Hills. This was a miniaturized device giving a yield which was 60% of the first tests. A small hillock now rises in what used to be flat desert, marking the ground zero of the nuclear test there. 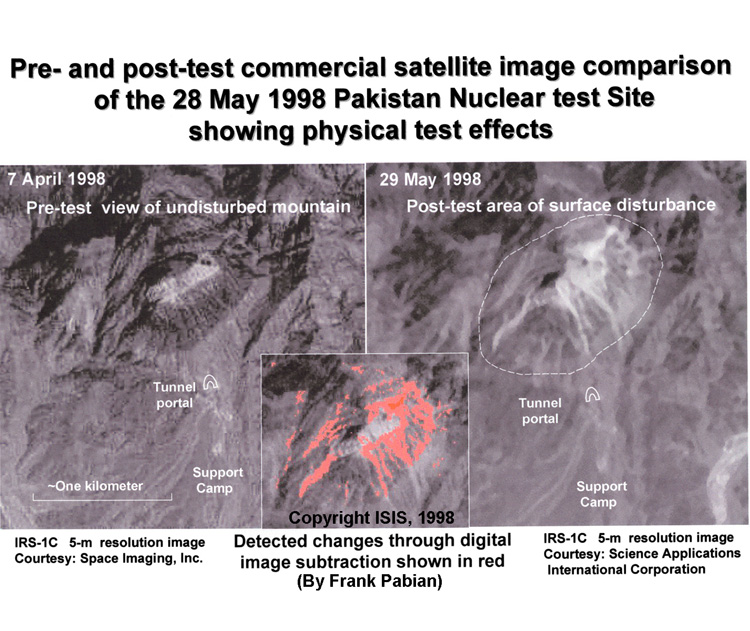 The Kirana Hills is a small and extensive rocky mountain range located in Sargodha, Pakistan. It is also a place of tourist attraction in Sargodha City. Locally known as “Black Mountains”  due to its brownish landscape, its highest peak is about 980 feet (300 m).

Pakistans first cold test of its nuclear device was carried out on March 11, 1983 in the Kirana Hills near Sargodha, home of the Pakistan Air Forces main airbase and the Central Ammunition Depot (CAD). Cold Test (CT) is a means of testing the working of a nuclear device without an explosion. This is achieved by triggering an actual bomb without the fissile material needed to detonate it. The test was overseen by Dr. Ishfaq Ahmed.

The need to improve and perfect the design of Pakistans first nuclear device required constant testing. As a result, between 1983 and 1990, the Wah Group conducted more than 24 cold tests of the nuclear device at Kirana Hills with the help of mobile diagnostic equipment. These tests were carried out in 24 tunnels measuring 100-150 feet in length which were bored inside the Kirana Hills. Later due to excessive US intelligence and satellite focus on the Kirana Hills site, it was abandoned 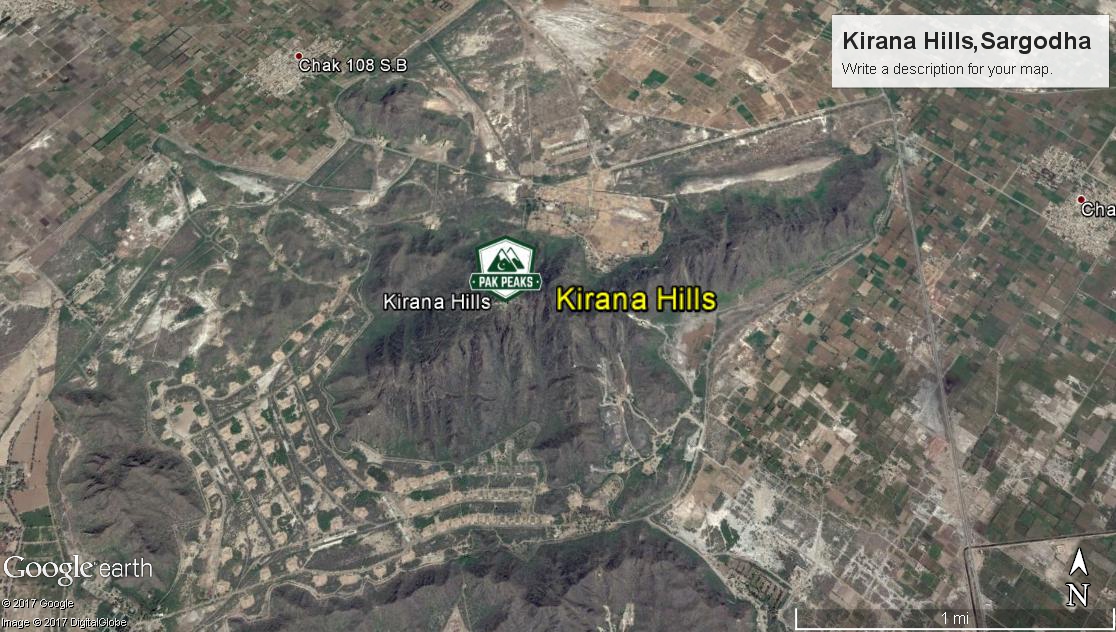 Located faraway from beautiful Pakistani city of Gilgit and nearby huge Nanga Parbat Massive, there in the westren hemisphere on the border of Alberta and British Columbia in Canada lies Gilgit Mountain (3122m) and Nanga Parbat Mountain (3240m).

Both of these closely located peaks (not PakPeaks!) are on the continental divide at the southern edge of the Freshfield Icefield; upper Mummery Glacier, Banff Park, Alberta and British Columbia border. Major headwaters are Saskatchewan & Columbia rivers.

It was named by J. Norman Collie in 1898. The name is related to the fact that Mummery’s expedition to PakPeak Nanga Parbat in 1896 last saw civilization at Gilgit. The Gilgit mountain (of Canada)  was first ascended in 1922 by Howard Palmer, J. Monroe Thorington, guided by Edward Feuz jr (Journal reference AJ 34-395, CAJ 13-67.)

This peak was named by Norman Collie after PakPeak Nanga Parbat in the Himalaya upon which he had climbed in 1895. 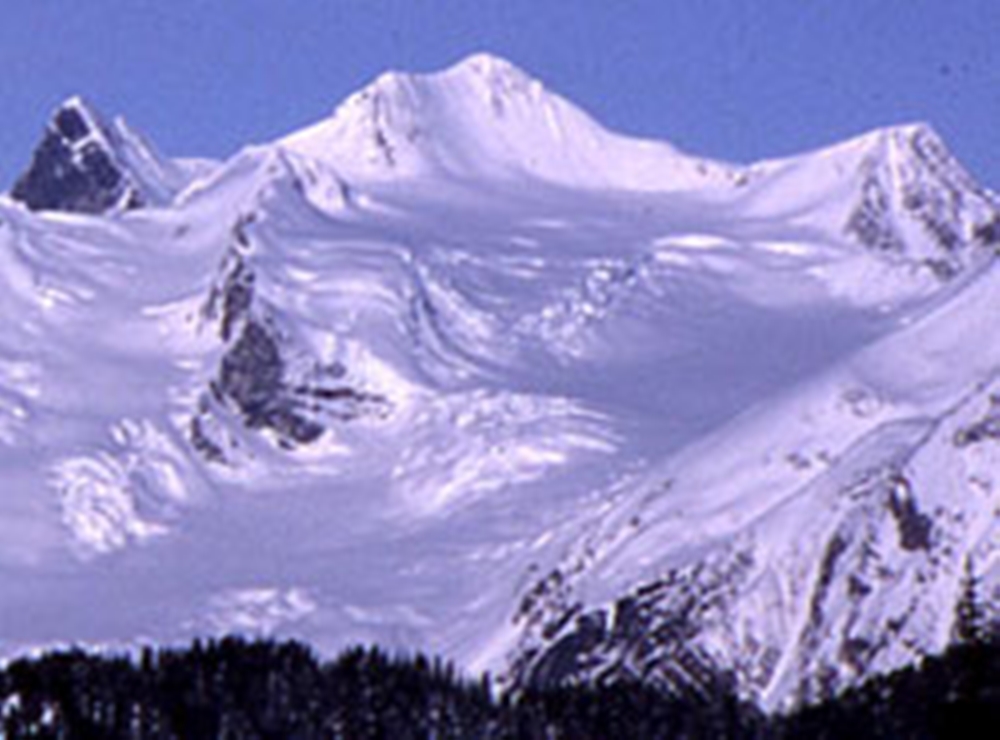 Norman Collie and Mummery, together with Geoffery Hastings, climbed together in the Alps in 1894 and the following year in the Himalaya. They had been climbing for over a month on August 23rd when Mummery set out with two “Ghurkhas,” Ragobir and Gomar Singh, to cross Diama Pass near PakPeak Nanga Parbat and perhaps make another attempt at the summit which had eluded the party. Collie seems to have been suffering from the many weeks at altitude and according to a letter written by Mummery, “was not keen on it.” Mummery and the Ghurkhas were never seen again. It was not until September 13th that Collie and Hastings set out on a three day trip to reach the camp where they had last seen their friend. However this late in the season searching the high glaciers was out of the question and according to Collie, “Slowly we descended, and for the last time looked on the great mountain and the white snows where in some unknown spot our friends lay buried.”