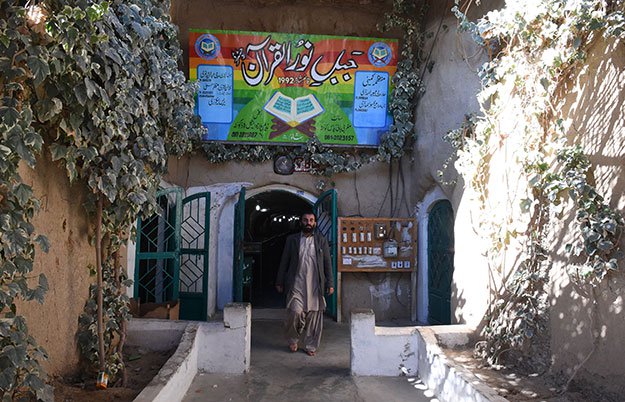 Inside the dry, biscuit-coloured mountains surrounding Quetta lies an unexpected treasure: a honeycomb of tunnels bursting with cases of Holy Qurans, hidden safe from desecration.

The hill known as Jabal-e-Noor, or “Mountain of Light”, has been visited by hundreds of thousands of people since two brothers turned it into a shrine for Islam’s holy book, some copies of which are up to 600 years old, officials who run it say.

But the mountain’s labyrinth of tunnels is steadily nearing capacity. Hundreds of sacks packed with copies of the holy book now lie exposed on the hillside as administrators struggle to create space for them.

The problem is especially thorny in Pakistan, where any disrespect to the Quran can inflame accusations of blasphemy, punishable by death — whether by the state or at the hands of a vigilante mob.

Islam’s holy text is believed by Muslims to be the word of God spoken through the Prophet Muhammad (pbuh) directly to mankind. For that reason the words themselves are held sacred, meaning Muslims must dispose of their old Qurans with great respect.

Religious scholars approve of two ways: by wrapping the book carefully in a cloth and burying it in the ground, as at Jabal-e-Noor, or placing it in flowing water so the ink is washed away from the pages.

But the man behind the mountain, affluent 77-year-old businessman Abdul Sammad Lehri, has an idea that, if realised, would prove both risky and revolutionary: building one of Pakistan’s first-ever Quran-recycling plants.

The move could turn Lehri’s shrine into a target.

In neighbouring Afghanistan in 2011, around 1,000 angry demonstrators partially destroyed a paper mill that had been accused of recycling the Quran into toilet paper.

While in Pakistan an angry mob torched a factory in Punjab province in November 2015 after one of its employees was accused of burning pages from the Quran in the boiler.

But, perhaps surprisingly, scholars in Pakistan say it could work.

“The scholars… approve recycling of Qurans and if a recycling plant is reusing the pages of Qurans, there is no harm,” says Tahir Mehmood Ashrafi, chairman of the Pakistan Ulema (religious scholars) Council.

So long as the words are removed, and the solution used to remove it disposed off in accordance with Islamic teachings, leading scholar Mufti Muneeb-ur-Rehman says, “then you can use those pages to reproduce or manufacture cardboards or anything”.

Existing plants in Pakistan do not recycle Qurans because of the restrictions involved, Irfan Qadir, secretary of the Punjab Quran Board, which monitors the collection and disposal of pages of Quranic verse, tells AFP — such as only Muslims being allowed to take part in the work.

“However,” he adds, “we have authorised a private foundation to recycle torn out pages of the Quran on very limited scale.”

The foundation, he says, puts water and the pages of the Quran in a barrel together, where the words are washed away.

After, “the water goes in a well dug in the ground and they use the pulp to make a very soft cardboard.”

The board has proposed a recycling plant for Qurans, he says, but no action has yet been taken by the government.

At Jabal-e-Noor, named after the mountain in Saudi Arabia where the Prophet (pbuh) is said to have received the first verses of the Quran, the idea exists only in the minds of Lehri and his team for now.

Visitors to the mountain can leave donations but pay no fee to enter, and Lehri says they need the funds. “We want to install the plant and dig out more tunnels, but have no resources,” he explains.

Lehri’s passion for protecting the words of the Quran began in 1956, he tells AFP during an interview at his home in Quetta, surrounded by medicines and newspapers.

He spotted a newspaper with a large picture of the Holy Kaabah lying on the floor of a friend’s car, he says. Picking it up, he vowed to make it his mission to forever safeguard holy images and words.

In 1992, he says, he and his brother Abdul Rashid were running a stone-crushing business on a property leased in the hills outside Quetta.

But they were only using a small portion of the space leased. So, he says, “I decided to bury them (the pages) inside this mountain”.

As the flow of pilgrims to Jabal-e-Noor increased, many began leaving messages scribbled on the walls of the tunnels — graffitied prayers, most seeking love, for God to grant.

“Oh God, may I get a marriage of my choice,” pleads one, while others are more specific: “God, please break Amina’s engagement and rid her of Hamza”.

Those who run the mountain are now also praying for a miracle.

“They initially agreed — but now they are not responding,” he says. 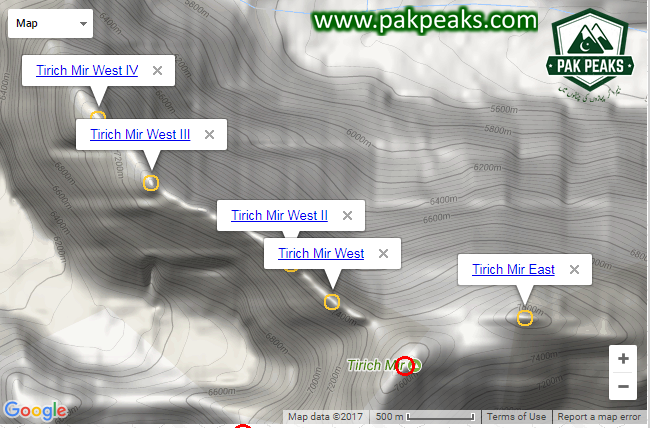 PakPeak Tirch Mir (7708 m) is the highest peak in the world outside Himalaya and Karakorum Region.The Tirich Mir is a chain of about eleven peaks with different routes to their submits.

Tirich Mir main peak 7,708m is the highest peak of the Hindukush Mountain range and was first climbed in 1950 by a Norwegian expedition which was lead by Arne Naess ,the famous Norwegian philosopher, other expedition members were P. Kvern berg and H. Berg.

Tirich Mir East with a height of 7,692m was another first Norwegian ascent done later in 1964 . Two members, R. Hoibakk and A. Opdal, reached top of Tirich Mir East

Tirich Mir West II , 7,500m was climbed in 1974 by Beppe Re and Guido Machetto of an Italian expedition. After establishing base camp, the party set up two additional camps. In order to acclimatize itself with high altitude climbing, the party also climbed an already-climbed Dir gol Zom peak.

On July 20 1967 Tirich Mir West I , 7487m was climbed through the north west col by a Czechoslovak expedition led by Engineer Vladimir Sedovy. J. Cervinka, I. Galfy, V. Smida and I. Urbanovic reached the top. The Czech expedition had not a single oxygen flask nor did they fix ropes.

The sixth peak of the Tirich Mir range is Tirich Mir West IV – 7,338m. It was climbed in 1967 by Kurt Diemberger and Dietmar Proske through the very difficult north face. Diemberger also made the first circle around the Tirich Mirs. The purpose was to carry-out geological survey of the area.

Another interesting peak in the Tirich Mir range is un-named with a height of 7,100m. This peak is situated to the south of Tirich Mir Main peak.. The northern spur of Tirich Mir at 7,056m was climbed in 1965 by Kurt Diemberger, Herwig Handler and Fritz Lindner of a German – Austrian expedition.

Tirich Mir Little 6,550m was climbed in 1969 by the British-Pak Army Mountaineering expedition which was led by Maj. J. W. Fleming of the British Army. 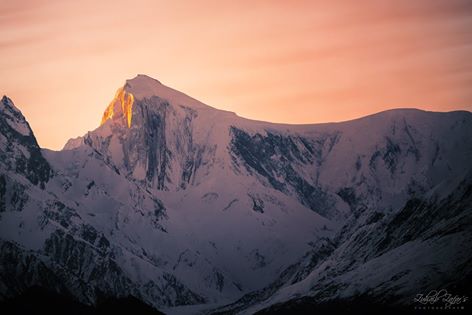 PakPeak Spantik (7027m) needs to be pronounced as “SPAAN-tk” rather than “Span-tick”. According to Pakistan’s legendary mountaineer Nazir Sabir it is the “easiest” peak in Pakistan above 7000m. It stands out among 170+ Category B PakPeaks (7000-7999m) mainly due to its relative ease of ascent and scarcity of objective dangers making it a popular choice with organized commercial expeditions. More recently it has become a favorite for climbers to train for higher elevations. Although it is famously called as Golden Peak there are at least eight different names of  PakPeak Spantik (7027m).

A PakPeak with Eight Names !

Spantik is a Balti word and originated from Sapang which means Garden and Tik is Little. So Sapang – Tik means Little garden. Probably this name hints towards a small green patch on its south ridge .

In Burushaski , one of the four major local languages of the area apart from Shina, Wakhi and Balti,  it is called as “Ghenish Chhish”, means “Golden Mountain”. The name refers to the “gold effect” on the peak particularly during sunset. Additionally, Ghenish in Broshaski also means Queen referring to its might and beauty and hence the Queen Mountain.

The northwestern face on the Nagar / Hunza side of the mountain features an exceptionally hard climbing route with its bright red color and is called as  “Golden Pillar”.

Due to its noteworthy 1187m topographic prominence it is sometimes also called as Pyramid Mountain.

According to few sources its another name is Yengtuz Sar.

Neighboring peaks of PakPeak Spantik (7027m) and approaching from Skardu / Baltistan side.

PakPeak Spantik (7027m) can be approached from Nagar Valley / Hunza  as well as from Skardu / Baltistan side. From Skardu it can be reached in about four days. This include one day Jeep travel from Skardu followed by three days of trekking on and beside 40 km long Chogolungma Glacier.The approach path  offers vistas of mountain scenery with innumerable high PakPeaks. Here is a typical itinerary.

Although PakPeak Spantik (7027m) is technically easy but it is for mountaineers who have the experience of climbing as independent roped parties on snow and glaciers and at least have been on some smaller peaks.The normal northern summer climbing season stretches from May through to October each year. 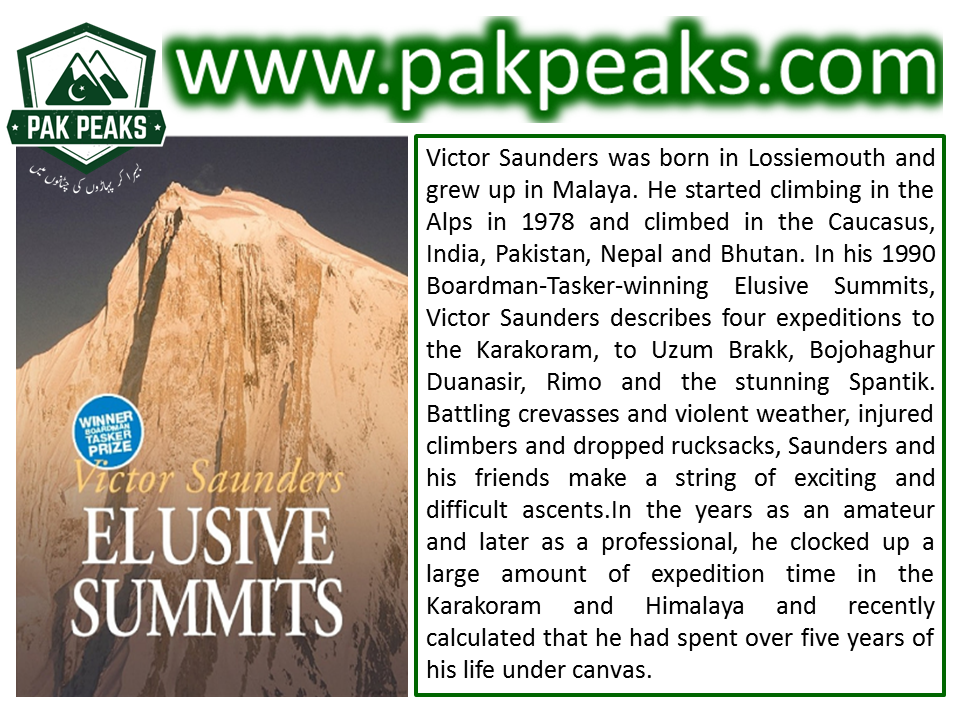 END_OF_DOCUMENT_TOKEN_TO_BE_REPLACED

It is located in Pir Panjal  Range near the city of Bagh in Azad Jammu and Kashmir, the 4,060-metre Ganga Choti offers spectacular views into Indian Held-Kashmir on the east, and can be climbed without any technical equipment.

The nearest town to it is Sudhaan Gali.

Rakaposhi,  is a mountain in the Karakoram mountain range in Pakistan. It is situated in the Nagar Valley approximately 100 km north of the city of Gilgit in the Gilgit District of the Gilgit–Baltistan province of Pakistan. Elevation: 7,788 m 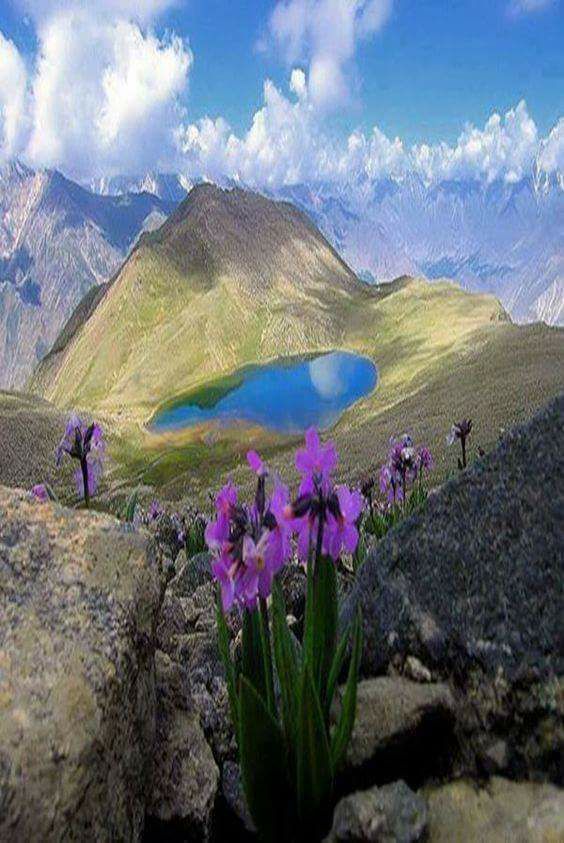 PakPeak Rush Pari commonly called as Rush Peak is located in the Gilgit District . It can be reached via Nagar Valley and Hoper Village. The peak can be accessed via Hoper Glacier (Bualtar Glacier) and Barpu Glacier. The peak is relatively easy to climb in the summer months and ascents have been made by amateur climbers without proper mountaineering gear. In winter, access to the mountain is made difficult by heavy snows. The top of the peak provides stunning views of PakPeak Miar (6,824 m) and PakPeak Phuparash (6,574 m).
On a clear day, one can look east and see PakPeak K2 (8611m) and PakPeak Broad Peak(8051m) . At the mountain’s base lies one of the world’s highest alpine lakes, Rush Lake (4,694m).

Other Category D PakPeaks in the range of (5000m – 5999m) include PakPeak Little Laila (5971m) in Rupal Valley , PakPeak Falak Sher (5918m) in Swat , PakPeak Malika Parbat (5290m) in Kaghan Valley and PakPeak Snow Dome ( 5029m) near Chaprot Pass in Gilgit- Baltistan which is different from Snow Dome near Concordia,