PC: Dr Najeeb Ansari (Karachi) Swat, dubbed as Switzerland of Pakistan is known internationally with reference to Malala Yousaf Zai, 2014 Nobel Peace Laureate. Domestically, valley is a favorite tourist spot with many destinations like Kalam, Baharin, Mahodand and Ushu to choose from. However it has another important feature, a mountain which is rightly called as K2 of Swat by the locals. PakPeak Falak Sar (5,918m) is a snow capped, pyramid shaped, beautiful peak  that completely dominates the land scape around it. It is the highest mountain peak in Ushu Valley of Swat and is part of Hindu Kush mountain range. Third from Left: Ahmad Mutjaba,Hamza Anees & Adnan Saleem Three climbers mainly from Lahore including Ahmad Mujtaba, Hamza Anees and Adnan Saleem made it to summit of PakPeak Falak Sar (5,918m) and became first Pakistanis to step on it. Ahmad Mujtaba  based in Lahore is an experienced climber who manages his climbing equipment brand. He along with Adnan Saleem, an avid you tuber summited PakPeak MalikaParbat (5,290m) in 2018. Hamza Anees climbed PakPeak Musa ka Musala (4,080m) in 2018 and PakPeak Khusargang (6050m) last year near Skardu, in a daring solo way. They left Lahore on 7 Aug 20 and reached back on 23 Aug 20. Owing to some dangerous developments beyond Camp II on PakPeak Falak Sar they had to spend two nights in a snow cave. Lack of proper communication with the base camp resulted in rumors about their whereabouts after reaching the summit. Thankfully after 48 hrs of chaos, three emerged at base camp safe and victorious. The mountain itself have relatively short and mysterious... END_OF_DOCUMENT_TOKEN_TO_BE_REPLACED 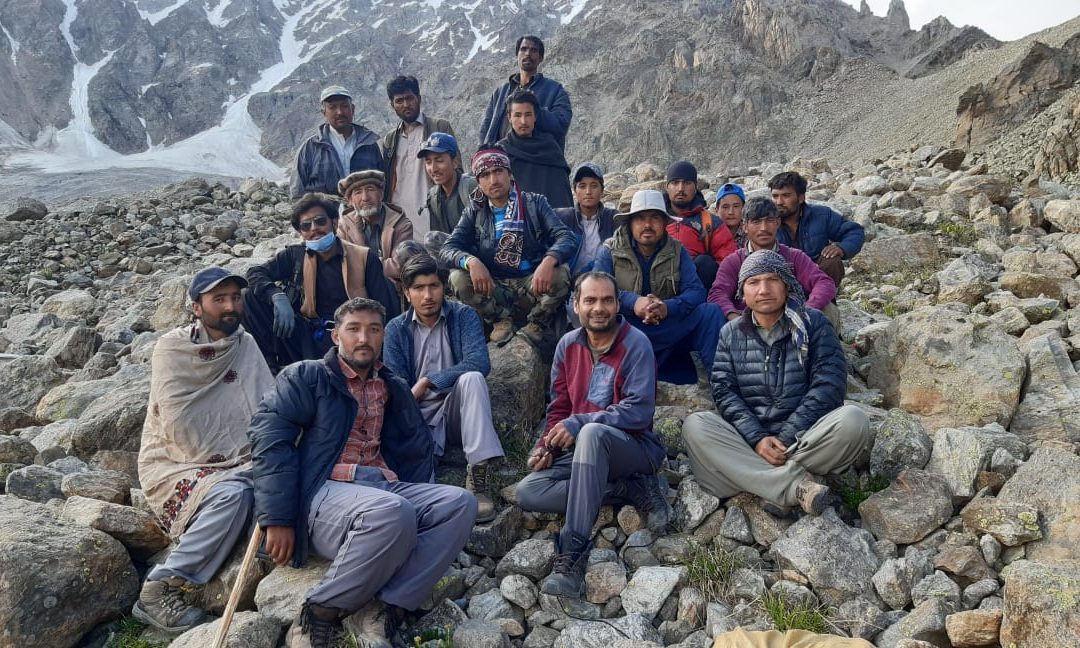 L to R Asif Bhatti (Leader), Saad Mohammed, Aheed and Tehseen. After putting up a “good example for the world to follow” against COVID19 as said by UN General Assembly President-elect Volkan Bozkir, Pakistan’s climbing season is also awakening from its deep slumber. A German Team led by Felix Berg and three others bagged the first ascent of a 5,770m PakPeak in Shimshal on 20 Aug. A Czech Team of three is already on its way to PakPeak Muchu Chhis (7,453m) in Batura Muztagh considered as highest unclimbed PakPeak. Meanwhile when foreign climbers are slowly pouring in, domestic climbers are also warming up. A team from Lahore successful made ascent of PakPeak Falak Sar (5,918m) in Swat, home town of Malala Yousaf Zai, the Nobel Laureate. Photo By : Asif Bhatti Another daring effort was put on by a team of four, under the shadow of fearsome Nanga Parbat Massif. PakPeak Rakhiot (7,070m) is a daunting climb towards the Rupal Face of Nanga Parbat which had been rarely attempted. Team included Asif Bhatti as the expedition leader , Saad Mohammed with two Everest attempts under his belt, Tasfeen Javad , a promising climber and comparatively a new comer Aheed Naveed. All the climbing was done by members themselves however team included two cooks both named Rauf (hence Rauf-I and Rauf -II) whereas Jamshaid and Qayum as supporting staff members. According to Asif , PakPeak Nanga Parbat (8,125m) had always fascinated him since his first visit in 2008.(It could be a case of love at first sight.) Since then he have been visiting this beautiful mountain more or less every... END_OF_DOCUMENT_TOKEN_TO_BE_REPLACED

You must have heard about K2 that it is a tough mountain.But How? There must be more challenging mountains than K2 but it is likely they would be on some other planet. As far as earth is considered K2 is second to none.So what exactly make K2 a nightmare for even the most daring mountaineers and climbers? Here are few possible reasons:- 1.Its High. K2 is high and it is in fact so high that there exist exactly one point on earth higher than it. Although officially K2 is 237 m or 781 ft feet shorter than Everest there was a unique time in history once it was suspected that K2 might be higher than Everest! 2. Its Symmetrical. Ask a child to draw a mountain and most likely he or she will come up with a triangular figure with steep slopes. That is K2! The symmetrical shape of K2 is something which makes it a mountain that has no backdoor or easy route. Although Pakistani side is considered to be easier but it is not drastically different from the Chinese side. 3.It Lacks Snow. The word Karakorum means Black Rocks. K2 as the highest peak of this mountain range justifies the name. Its lacks snow and thus appears as a giant mass of bare rock and brittle ice making the climb more challenging. In addition strong winds on K2 blow off the snow, converting this snow white into a black beauty. 4.Its Windy. If there had to be one killer other than freezing temperatures on K2 it would be wind. It is one of the major differences between... END_OF_DOCUMENT_TOKEN_TO_BE_REPLACED

Just one month past 2019 and possibly the greatest adventure of the year is already unfolding at the world’s second highest mountain PakPeak K2 in Northern Pakistan. Although it may not be as historical as stepping on the moon nevertheless first ascent of K2 in winters will be a giant leap for ambitious humans. Till to date of all the 14 mountains that rise at least 8,000 meters (26,246 feet), K2 is the only peak unclimbed during winter. In the words of Alex Trikon, the team leader of Spanish / Polish dominated “Western Team” currently on K2, in an interview with Nat Geo said “I can’t say it’s the last challenge for the 8,000ers,but it is one of the last great challenges”. With two geo politically different teams on K2 i.e. Russian dominated “Eastern” and European dominated “Western” team, all eyes are set on K2 from experienced climbers to couch potatoes having remotest interest in climbing. Here is the journey of Eastren Team (Russia, Kazakhstan, and Kirghizstan) so far:- Vassily Pivtsov, from Kazakhstan is the lead mountaineer and have summited all 14 8,000ers without oxygen. The Eastern team arrived in base camp on January 15 and included some of the strongest high-altitude climbers.Group initially struggled to find a corporate sponsor, and raised money through selling T-shirts via their Instagram accountOn 2 January 2019, they landed at Islamabad Airport.On 4 January they moved from Islamabad.On 5 January, team reached Skardu.On 7 January move from Skardu for Askole.On 8 tJanuary moved out from Askole.On 13 th January  team reached Concordia (Throne of Mountains)On 14 th January 2019 moved for K2 Base Camp. Courtesy: National... END_OF_DOCUMENT_TOKEN_TO_BE_REPLACED

In a deeply moving statement, a message of goodwill was sent by a team of mountaineers who themselves are stuck on K2 due to extremely harsh weather for their mountaineer friends on  Nanga Parbat. Winter on K2 and Nanga Parbat This winter, unlike on PakPeak K2, where two highly skilled teams are present there is only one on Nanga Parbat. The expedition teams consists of two Pakistani and two European mountaineers along with a support team of 75 local porters. First winter ascent of  Nanga Parbat was done in 2016.Team included mountaineers Alex, Simone More and Ali Sadpapara. This time team will be trying to open a new route on Nanga Parbat, which it has named as ‘Mummery’. Team Nanga Parbat comprises of two Pakistanis including Rehmatullah with experience of PakPeak Gasherbrum-I and PakPeak Gasherbrum-II. Karim who scaled PakPeak Broad Peak is also in team. The European team included Thomas Ballard who is he son of famous British female mountaineer Alison Hargreaves, who died on August 13, 1995 while descending from the summit of K2. The second Euorpean on Nanga Parbat is  Nardi who is is a seasoned mountaineer and had visited Pakistan more than 12 times.He had already scaled several peaks, including Mount Everest, PakPeak K2 and PakPeak Nanga Parbat. It will take at least two months to complete their voyage. Any one trying to climb an 8,000-meter have to negotiate with wind gusts of over 40mph/65kph. Such winds are capable to knock off the climbers from the mountain’s slope. While climbers on both the PakPeaks K2 and Nanga Parbat are trying hard to coup with wind and extreme... END_OF_DOCUMENT_TOKEN_TO_BE_REPLACED

This winter season on the world’s second highest mountain K2 is historic in every sense. Widely considered as “the last problem of mountaineering” climbing K2 in Winters had been a distant dream so far.Since late eighty’s only four teams have tried to climb the summit in winter; all without success. It is now almost three decades since first attempt for K2 in Winter was done and no human to date have crossed K2 beyond 7650m altitude in harsh winter of Karakorum. Currently two Teams are on K2 seeking out to overcome this “Last Great Challenge” . First one is the ”Western Team” comprising of Spanish and Polish Mountaineers which is lavishly equipped and sponsored, led by 37 year old Spaniard  Alex Tricon.The second team is  a Russian / Kazakhstan / Kirghizstan dominated which can be referred as “Eastern Team”. This team unfortunately is neither well equipped nor sponsored enough . Despite of the fact that mountain climbing is a team sport which heavily depends on support staff including the accompanying sherpas and logistics people at the base camp it all ultimately boils down to the leadership of a daring mission like that.So how the team leaders of these two different and highly competitive teams compare to each other. The team leader of Western Team “Alex Txikon”  was born in Spain on December 12 , 1981. To his credit are almost thirty expeditions including fourteen of 8000ers . Most noticeably in 2016 he completed the first winter ascent to Nanga Parbat .With unsuccessful winter climb of Everest in 2017 and successful climb of Nanga Parbat in 2016 in Winter Alex is in good shape to... END_OF_DOCUMENT_TOKEN_TO_BE_REPLACED
« Older Entries