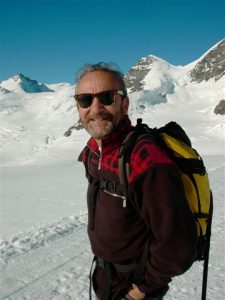 Mountaineering is in his blood as his father Group Captain Shah Khan was himself a climber of his time. Native of Hunza which is known for climbers and working with Pakistan Army which is an academy for mountaineers, Sher Khan has all the circumstances to become a climber, which he is. Undoubtedly he is a born and natural climber.
Sher Khan is amongst the very few lead climbers of Pakistan. Unlucky not to reach on the summit of K-2 even crossing the magic line of 8000 meters twice, but he has climbed all the rest four eight thousanders of Pakistan. He was detailed as deputy leader of Pakistan Mount Everest Expedition – 1997.While climbing two eight thousanders in one attempt, he was also the member of Messner’s team.
Apart from his mountaineering activities and profession, he is also a top class player of Polo. Moreover Alpine Club of Pakistan has enjoyed his services as vice president for last few years. He is another recipient of President’s Award for Pride of Performance (sports).