Book Review – Beyond NJ 9842: The Siachen Saga By Nitin A. Gokhale 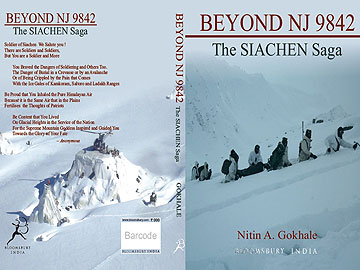 This book covers the operational history of the Indian Army on Saltoro Ridge – Siachen Glacier.

In 1975, maps published by a US commercial firm showed the LOC extending from the formally demarcated NJ 9842 point, running straight northwest to Karakoram Pass making the pass a tripoint between Pakistan China & India and bringing the entire Siachen area under Pakistan.

As Per India, the tripoint should lie north of Indira Col, the northernmost point on Saltoro ridge line bringing the Siachen glacier and the area upto Karokaram pass under India.

The book describes how Pakistan’s “cartographic aggression” was accidentally discovered by India and then the mad race between India & Pakistan to occupy those crazy heights (6000m+). The book attempts to cover 30 years of operation deployment of the Indian Army .

The book fails to provide a narrative. It is best to read this book as a collection of stories about Siachen. The author freely quotes paragraphs from other books about Siachen as well as whole articles from magazines.