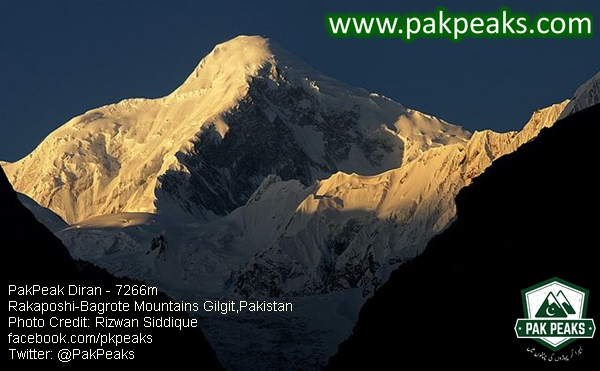 PakPeak#109 Diran (7266m) located in Rakaposhi-Bagrote Mountains is overshadowed by its much better known and taller neighbor PakPeak Rakaposhi (7,788 m).Diran enjoys reputation of being a treacherous mountain.

It is considered by few as the third killer mountain in Pakistan after K2 and Nanga Parbat mainly due to avalanches.From climing view point  however is also considered as the second easiest 7000m   after PakPeakSpantik.

Diran is a relatively straightforward trek from Minapin, which is just off the Karakoram Highway. The peak can be viewed in its full glory from Rakaposhi base camp or even a camping site straddling the main glacier on the south face of the mountain.

Diran was first climbed in 1968 by an Austrian expedition.

While attempting Diran in July 1980, Inayat Shah, who served in the Pakistan Army (SSG) lost his life. He was brother of Pakistan’s legendry mountaineer Nazir Sabir.This was Inayat’s second attempt on PakPeak Diran on a SSG expedition.

On their first trip in 1979 they had to return from merely 150 m from the summit due to Khalid Bashir who had developed pulmonary edema and on the descent unfortunately he fell to his death. A year after, SSG people returned to look for the body of Khalid Bashir and also to take on Diran itself for taking the life of their close colleague.

Khalid Bashir along with the climbing leader Shaukat Nazir Hamdani and Rasheed were buried under on an ice avalanche while attempting Diran.

On this second Army SSG Expedition while waiting out a bad weather spell in camp-3 thus ending the hopes of Nazir and his brother to climb Broad Peak the following year and many mountains together. The Expedition was led by the legendary “Brig. T M”.