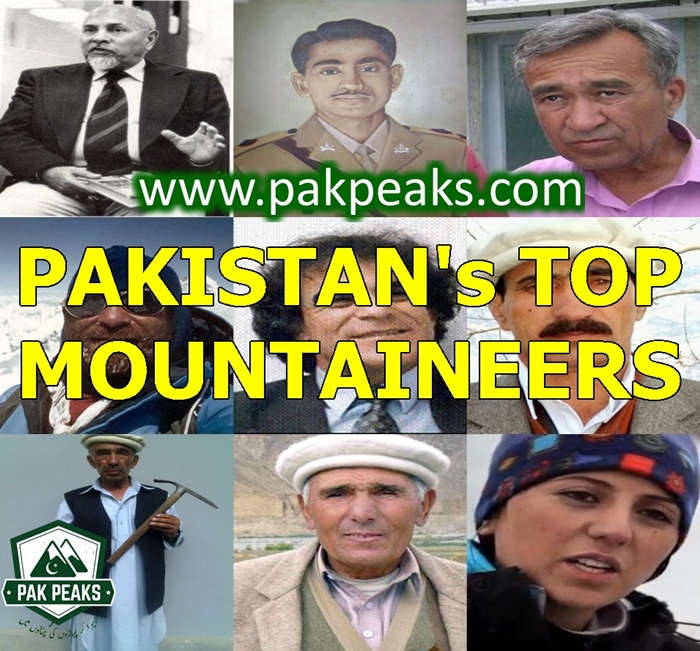 Pakistan is home to world’s five peaks above 8000m and more than 100 peaks above 7000m. Owing to its spectacular peaks Pakistan can be truly called as the “mountains capital of world”. Here is a brief introduction to Pakistan’s Top Ten mountaineers.

Col Mohammad Ata-Ullah (1905-1977) was an army doctor and mountaineer. Graduating as a doctor in 1928, he joined the British Indian Army in 1930. In  1947 he joined Pakistan Army and become the first Director Health Services of Azad Kashmir.In  February 1953, Col Ata was invited by American mountaineer Charles Houston to join the summer expedition to K2. Devoid of any mountaineering knowledge he reluctantly joined.The expedition failed to reach summit. Next year Col Ata was offered by an Italian expedition aiming for surmounting K2 still a virgin peak. This Expedition turned out to be successful on July 31, 1954. Col Ataullah after retirement turned to entrepreneurship  and  founded Indus Valley Construction company (IVCC).In 1960  Col Ataullah came up with an excellent autobiography called  ‘Citizen of Two Worlds’ published by Harper & Brothers, New York.

Major Javed Akhtar Khan was an army officer (Staff College, Camberley) and a prodigious mountaineer. He became first Pakistani to summit a “major” peak, when he reached atop Masherbrum (7821m) also called K1 on 8th July, 1960.For this notable achievement, he was awarded the President’s Pride of Performance Award in 1961. Maj Javed Akhtar lead several Pakistani expeditions to different peaks in Karakoram and Hindukush, most prominent being 1969 expedition to Broad Peak. Javed Akhtar, who was a Major by then and second-in-command of 30 FF Bn, was killed in action during 1971 Indo-Pak war. He showed a heroic display of military excellence in the absence of ample resources at Dhullai, before his shahadat  on 31-Oct-1971.   One of his sons Lt Col Waqas Javed  is currently serving in Pakistan Army.

Raja Bashir Ahmad was an Ex-PIA officer born in 1938 in Charehan, a village near Murree. He made the first ascent of Saltoro Kangri (7,742 m) in 1962 at the age of 24.Saltoro Kangri is situated near Siachen glacier, the highest battlefield in the world since 1984.First attempt to ascend this peak was carried out in 1935 by a British expedition that fell only 300m short of summit.1962 Expedition to Saltoro Kangri was a joint venture of Kyoto University, Punjab University and Karakoram Club. Raja Bashir Ahmed joined this joint Pak-Japan expedition. After three weeks of struggle through deep snow and a bitter cold night in the open at 7400meters, Raja Bashir made it to the summit with Japanese colleagues on 24th July 1962.

Born in 1955  Nazir Ahmad Sabir from Hunza,.is one of the most distinguished mountaineer in Pakistan. He is the first Pakistani to ascent Mount Everest. Sabir summited K2 in 1981 via new route – West Ridge/SW side, only Pakistani to summit an 8000er via new route. He is the recipient of Sitara-i-Imtiaz and President’s Pride of Performance award. Sabir’s mountaineering career include Passu Peak (1974), Nanga Parbat (1976), Paiyu Peak (6660m) and in 1977 he reached 8280m on K2.

In 1982, Nazir Sabir along with Col Sher Khan and Reinhold Messner climbed Gasherbrum II (8035m) and Broad Peak (8047m). He summited Gasherbrum I (8068m) in 1992.Nazir Sabir in 1997, he led mountaineering and filming team to Everest. Sabir summited Everest on 17 May 2000. Nazir Sabir was elected as a representative to the Gilgit Baltistan Provincial Assembly in 1994. He is currently working as an environmentalist on the conservation of wildlife in his native Hunza Valley .

Rajab Shah was a mountaineer from Shimshal, Hunza-Nagar, He started his mountaineering career as a High Altitude Porter, In 1998, he became first Pakistani to climb all eight-thousanders in Pakistan. He achieved this feat without using supplemental Oxygen. He was honored with President’s Pride of Performance Award in 1993. Shah also appeared in 1991 Mountaineering movie ‘K2’ as a Balti Porter. Rajab’s first 8000er ascent came in 1989, when he summited Nanga Parbat as a part of German-Pakistani Expedition.Later Rajab topped Gasherbrum I twice in 1990 and 1992. In 1992, he reached summit as a porter though his Japanese Mountaineers were unable to top. He stood on top of K2, highest peak in Pakistan, in summer of 1995.In 1998 he summited Gasherbrum_II to become first Pakistani to climb all five eight thousanders.

In May 2015 Rajab breathed his last at CMH Gilgit.His mountaineering school in Shimshal village produced famous climbers like the brother-sister duo of Mirza Ali and Samina Baig, Qudrat Ali, Shaheen Baig and others.

Ashraf Aman  has the honor of being first Pakistan to scale any 8000er.He was born in Aliabad, Hunza on 15th January 1943. He received the degree of B. Tech in Electrical Engineering from N.E.D. Engineering University, Karachi.He was a member of second successful expedition, a Japanese-Pakistani joint venture to K2 in 1977. Total of seven climbers including six Japanese and one Pakistani  reached the summit in a span of two days. Aman became first Pakistani to climb K2 or any peak above 8000m.In recognition of his mountaineering feats and other services, he was awarded President’s Pride of Performance Award in 1982. Wife of Ashraf Aman, Dr. Parveen Aman was director of Gilgit based NGO, Mountain Woman Development Organization.

Hassan Sadpara (born April 03, 1963) is a mountaineer and high altitude porter from Sadpara village near Skardu. In 2007 he became second Pakistani to climb all five eight-thousanders PakPeaks. after Rajab Shah .Hassan is also the second Pakistani to summit Everest after Nazir Sabir. He holds the honor of being only Pakistani who has made it to the summit of six out of fourteen  8000ers. He was honored with President’s Pride of Performance  in 2008. His first ‘big’ altitude climbing task was the Koreans expedition to Broad Peak in 1996. Germans hired him for expedition to Nanga Parbat in 1999.After four days of eating virtually nothing, he went on to become the first person to stand on summit of Nanga Parbat that year. It was Hassan’s first 8000er ascent. Hassan climbed K2 in 2004 as a part of expedition celebrating Golden Jubilee of K2’s first ascent. He climbed GI and GII duo within five days’ time span in 2006.In 2007, he summited Broad peaking along with his younger brother, to become the second Pakistani to summit 5x8000ers in Pakistan.In 2009 Hassan met President Asif Zardari at the Presidential palace in Islamabad to seek financial aid to fulfill his dream of climbing Everest. The help did arrive and Hassan went to Everest in spring 2011.He summited on 12th May. Currently, he works as an altitude porter and runs a shop of dealing in mountaineering equipment. He strongly believes that he can make it to 14x8000ers, if financially supported.

Born in 1933 Amir Mehdi was a High Altitude Porter and climber from Hassnabad, Hunza. He was a participant of 1953 German Expedition to Nanga Parbat. Mehdi returned down from Camp IV due to health issues. Next year, it were efforts of Walter Bonatti and Amir Mehdi that made first ascent of K2 possible. Both of them shifted bottled oxygen directly from Camp VII to Camp IX, late in the night. To their surprise Camp IX was not present at it’s agreed spot. The Italians Lino Lacedelli and Achille Compagnoni asked them to go down. Already exhausted, descend to lower camp in dark wasn’t possible. Walter Bonatti and Amir Mehdi bivouacked at 8100m in freezing cold. Mehdi descended next morning, severely frostbitten and had to undergo several surgeries. He lost ten fingers and couldn’t climb again. He was first Pakistani mountaineer to reach a height above 8000m. Mehdi died in  2000.

Samina Khayal Baig born 19 September 1990 is the first Pakistani woman and the third Pakistani to climb Mount Everest. She is also the youngest Muslim woman to climb Everest, and the first Muslim to climb the seven summits (highest peaks of each continent).On 19 May 2013, her brother Mirza Ali, approximately 248m short from the summit of Everest, let his sister go to the summit on her own without his support,to give message of Women empowerment in Pakistan. A documentary film Beyond the Heights was also made on her expedition to Mount Everest. On 18th of July 2015 while climbing to camp-2 on K-2 for acclimatization as part of her summit attempt, she lost her balance and hit a sharp rock, injuring herself. She had to be evacuated back to base camp.

Nisar Hussain  Sadpara  (1975 – 2012)  was a mountaineer and high altitude porter who cumulatively made record ten ascents of five eight-thousander peaks in Pakistan.He is third Pakistani to summit all five , eight-thousanders Pak Peaks and was awarded with President’s Pride of Performance Award in 2012. He achieved his first major climbing feat in 1996 when he climbed Sia Kangri (7,422 m) situated at the confluence of Siachen and Baltoro glaciers as part of a Pakistan  Army expedition. In 1999, he accompanied a Korean Expedition to Gasherbrum II (8,035). He reached the summit of Broad Peak in 2000. In  the year 2003, Nisar with a Korean expedition, climbed Gasherbrum II (8,035) and Gasherbrum I (8,068 m) within a span of 24 days. Nisar Hussain in 2004 went on to become youngest Pakistani to summit K2 (8611m).He climbed all 8000ers without supplemental oxygen, as he used to say, “I rather feel miraculously better, as I go higher”. In 2008, he climbed Nanga Parbat in the company of a German expedition through Diamer face.
In 2012 Nisar Hussain Sadpara alongwith two other climbers went on a daring winter expedition .It was a brave attempt to make first winter ascent of Gasherbrum I; to be done via a new path (never done in winter). He along with others was last seen just below the Gasherbrum I summit on the fateful day of 9th March 2012 at 12 pm,It was later assessed that all of them disappeared while their descent and were declared lost near the Summit .