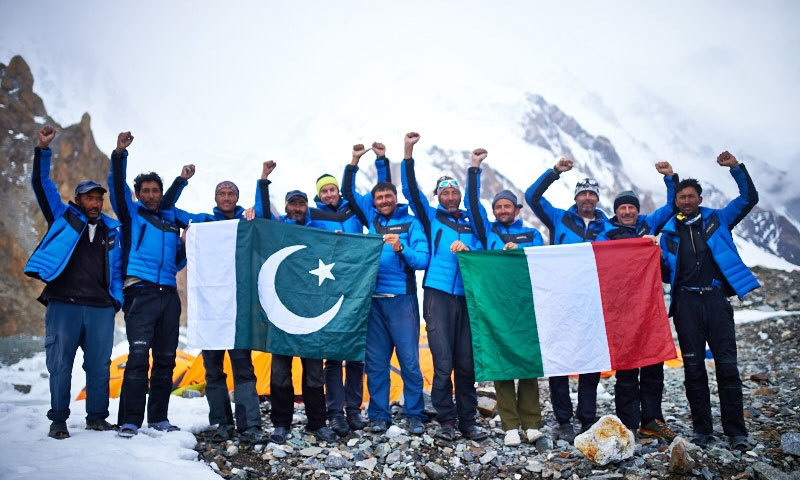 The climbing history of K2 can be divided into two parts.

The first ever attempt to climb K-2 was in 1902 by British engineer Oscar Eckenstein. His summit attempt along the northeast ridge stalled at almost 6000m.

In 1909 the Duke of Abruzzi, attempted the climb via the southeast but made it only to 5974m. This route, called the Abruzzi Spur, latter led to the first summit of K-2.

In 1938 the American expedition led by Charles Houston made upto 7925m on the Abruzzi Spur Route.

This era starts from the first successful summit by Italian team via the Abruzzi Spur on 31 July 1954. The team included a Pakistani member, Colonel Muhammad Ata-ullah, who had been a part of the 1953 American expedition. Captain (later Lt. General) G.S. Butt was the liaison officer. Also on the expedition was Pakistani Hunza porter Amir Mehdi who lost his limbs due to frost bite.

In 1978, an American team  made the third successful ascent of K2 using a new route i.e North East ridge. A notable Japanese ascent was that of the difficult North Ridge on the Chinese side of the peak in 1982.

The first climber to reach the summit of K2 twice was Czech climber Josef Rakoncaj .

The first woman to summit K2 was Pole Wanda Rutkiewicz on 23 June 1986.

In 1986, two Polish expeditions climbed via two new routes, the Magic Line and the Polish Line.

On 26 July 2014, a team of six Pakistani and three Italian climbers scaled K2 to commemorate 60 Years of first K2 ascent.