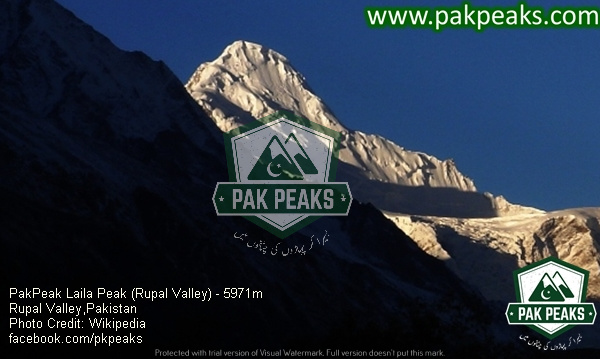 ‘Laila’ means ‘night ‘or ‘dearest or most love one’. Interestingly there are at least three Pakistani Peaks named Laila .The fourth Laila Peak is a 4000m high beauty located in mountains in Svaneti, Georgia.

The tallest Laila PakPeak is located on the south side of the Chogo Lungma Glacier in the Haramosh Valley.It is 6,985 m (22,917 ft) high and near a more renowned Spantik (Golden Peak) PakPeak (7027m). 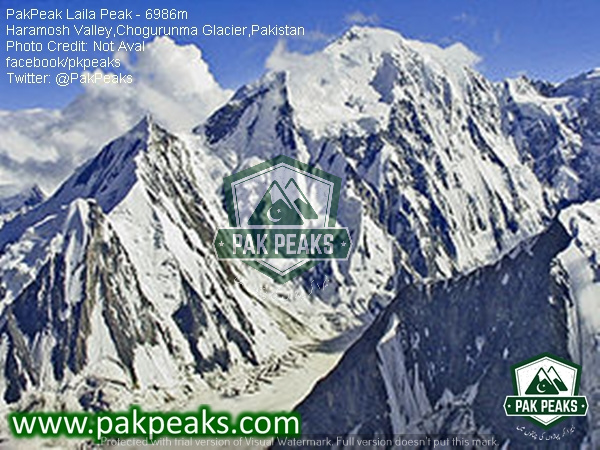 The second Laila with an elevation of 6,096 m is arguably one of the most beautiful PakPeaks. It is located in Hushe Valley near Gondogoro Glacier in the Karakoram range. It is in east of the Gondogoro valley and west of the Chogolisa valley in the Masherbrum Mountains of Baltistan . The mountain lies in a restricted zone. The village of Hushe is the gateway to the mountain, in the Masherbrum Valley below but the Gondogoro and Chogolisa valleys are restricted. 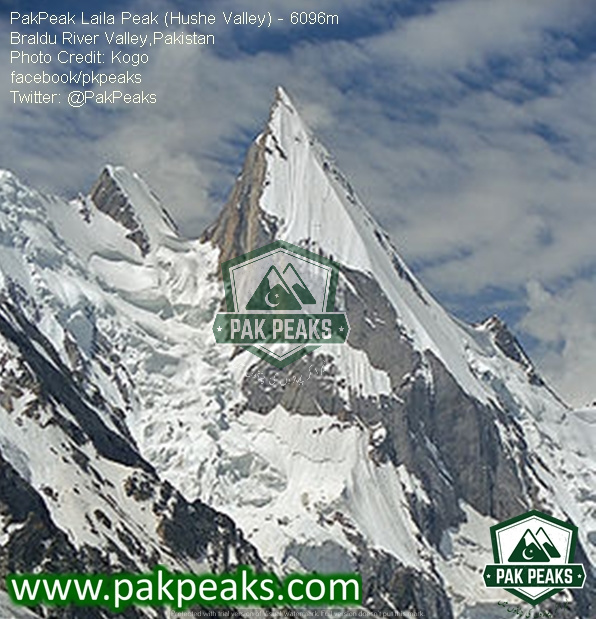 This peak has a distinctive spear/ needle shape making it famous. Its northwest face has a slope of 45 degrees in more than 1500 vertical meters. Its west face drops down the mountains at almost uniform gradient forming a giant ramp. Its northern and eastern sides consist of contrasting steep granite. Pretty Laila PakPeak can be seen after crossing the Gondogoro La Pass from Concordia and K2 base camp. The first ascent of pretty Laila was made by a four man British team including Simon Yates who climbed in 1987 via the west face from the Gondogoro Glacier. While technically being an ‘unofficial’ climb it became as official when Simon Yates dedicated a chapter of his biographical book “The Flame of Adventure” on the climb. This included a number of excellent photos of the climb.The same party went on to make a first ascent of the nearby Nemeka PakPeak (6325m). 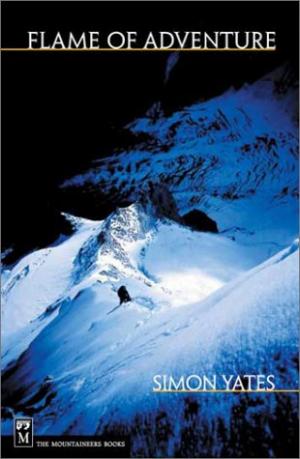 Pretty Laila PakPeak came in international limelight in summer of 2005, once Fredrik Ericsson and Jörgen Aamot skied down its North-West face. This was a the first ski descent on this PakPeak. The pair did not actually summit the mountain stopping 120 to 140m short as icy conditions at the very top would have been suicidal to ski down. It was described by them as “one of the most amazing mountains they have ever seen, like a needle it points straight up in the sky“.

The smallest of three i.e Little Laila lies on the south side of the Rupal Valley in the western Himalaya. This pakpeak is 5,971 m  (19,590 ft) above sea level and some 7,500 feet above the Rupal Valley floor. To its north lies the Rupal Glacier, further north of which stands the Nanga Parbat massif, one of largest in the world. To the east of Little Laila lies 5,642m high Rupal PakPeak.

All the Laila PakPeaks have been climbed, but surprisingly, no single person has climbed them all.